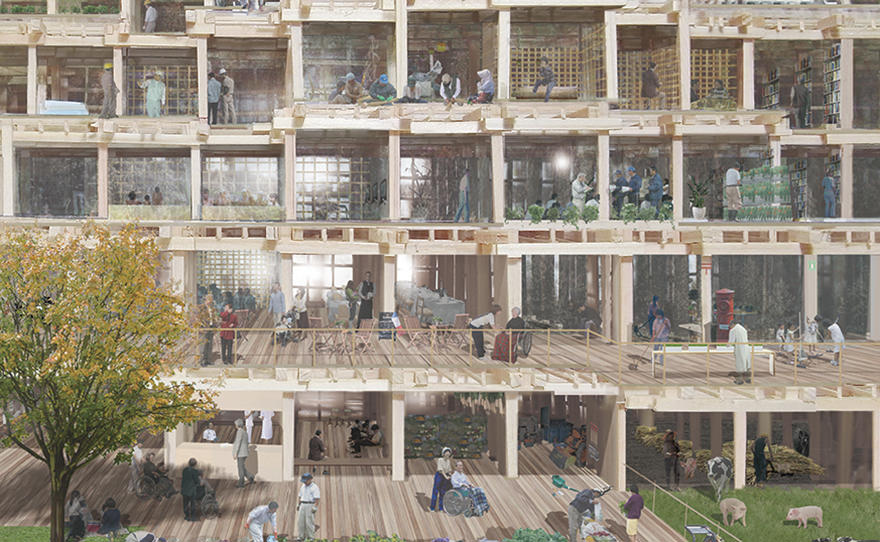 This is a community model for a semi-mountainous area. In such areas—which account for some 70% of Japan’s total land surface—communities are experiencing crisis conditions, including aging population, a lack of successors, land abandonment, and village collapse. In response, we have proposed this “incubation facility” for fostering contemporary agricultural managers having a will to pioneer new markets, work with consumers, restaurants, and tourism, and even engage in product fabrication, sales, and distribution. As an alternative to agricultural villages with residences scattered across large areas, our model proposes a large-scale building for collective living. Concentrating residents in one location enables urban conveniences, recreation, and the formation of transportation and medical systems. Such an approach also facilitates communication between aging agricultural personnel and youth seeking agricultural employment, and also the sharing of agricultural knowledge, techniques, and labor. By introducing Information Technology, this model can reconstruct agriculture as a knowledge- and labor-intensive industry and transform it into a leading edge industry for the age of the knowledge economy. Our community model takes “local production for local consumption” as it aims in securing food, energy, and building materials. For building materials, the model employs columns and beams of locally grown cedor (sugi) and cypress (hinoki) in a standardized format enabling residents to build without requiring special techniques, during intervals between farming seasons. Conventional Japanese methods of connecting beams require complex joints and metal fittings, rendering the replacement of deteriorating materials difficult. We therefore created a method of alternately attaching beams and girders to the column using four removable bolts. The building’s overall form derives from a strategy for dealing with dry rot. To enable visual inspection, repairing, and replacing of the outer wall wood materials, particularly susceptible to rot, we set back each succeeding floor, with result that the floors have terraces for use as work scaffolding. The labor of maintenance not only gives the building sustainability but also ties into local employment and forest maintenance, and economic circulation. As a result of these simple rules, the building presents a nest-like appearance and melds with its mountain landscape. Trees raised on the mountain are cut and placed in the river, and then picked up from the lumber pool at the bottom, dried, fabricated, and assembled. In accord with the scale of the timber, the hallways and rooms employ small modular spaces on a 3m x 3m grid, expandable in number as needed. The interior is characterized by consecutive small spaces enveloped by wood columns. Owing to the simple joinery, by which columns and beams are added one by one, the construction method is similar to building a nest. Both in form and composition, the building looks like a beaver lodge. Its spaces will no doubt engender vigorous, joyful lifestyles. This wood building will call attention to its existence and become a symbol of agricultural venture business. Here, architecture presents an image of the new lifestyle, community character, and environmental awareness demanded by the times and promotes the diffusion of these concepts.