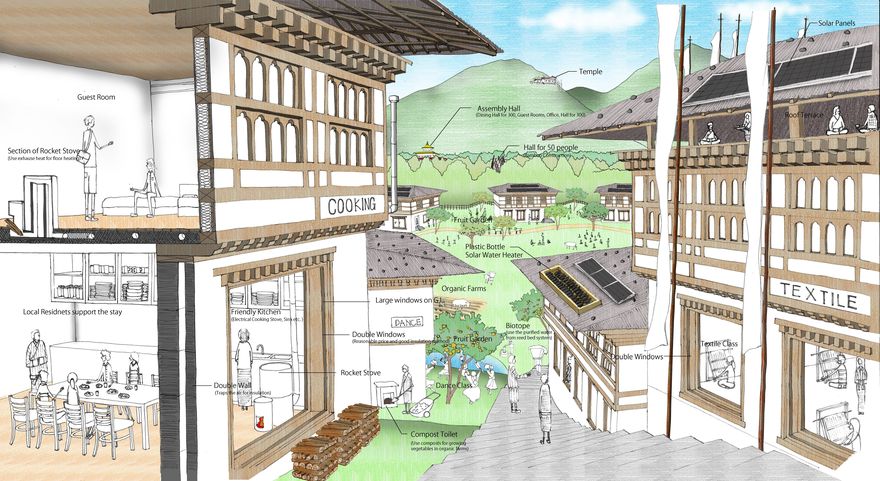 This is a proposal for a resort facility and cultural center that aim to pass on the philosophy of Gross National Happiness (GNH) advocated by the Wangchuck king of the Kingdom of Bhutan. We participated as the master architect at the request of Jigme Thinley, who was then prime minister of Bhutan. For the site approximately 170,000m², we designed 25 lodging facilities varying in size along with restaurants, convention halls, spas, and meditation facilities.The site is in northern Bhutan near the entrance of a national park in Bumthang district, in a stretch of mountains along a river. By establishing four zones—two Village Zones, a Dzong Zone, and a Meditation Zone—we formed a composition that enables visitors to experience traditional lifestyle and culture. Our aim was to promote a sustainable lifestyle by giving play to the wisdom of the Bhutanese people, who live without relying on advanced mechanical equipment. To this end, we designed sustainable buildings that maximize utility of solar, wind, geothermal, and other natural energy resources. The design of the buildings actively takes in the traditional elements of Bhutanese architecture while adapting to contemporary lifestyles and technologies. The GNH Center aims to serve as a place for the manifesto behind the Bhutanese way of living that realizes the philosophy of GNH, which strives for environmental preservation, cultural enlightenment as well as management, and fair and sustainable socio-economic development.