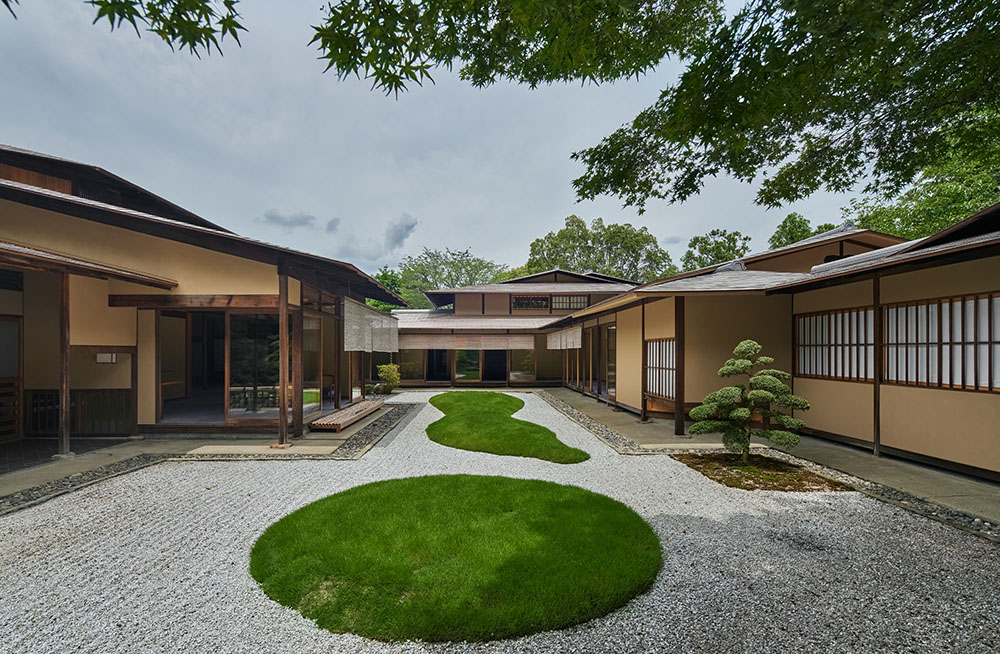 The Westin Miyako Kyoto is located at Keage, where the Lake Biwa Canal flows into Kyoto. The hotel is one of the most luxurious hotels in the city, having its origin in "Yoshimizu-en," a villa that was built to coincide with the opening of the Canal.Kasui-en is a Japanese-style annex of the hotel, well-known as a masterpiece of Sukiya-style architecture designed by architect Togo Murano. The impressive appearance of the multiple low and thin roofs, with the roofs on the gable side bowing their heads from the ridges, conveys the beauty of the building even now, 60 years after its construction. However, because it is aging, it has to be retrofitted to withstand earthquakes. The existing guest rooms were small and simple, and they were not prepared to meet today’s needs, so the hotel decided to renovate this gem to make it a permanent working accommodation. 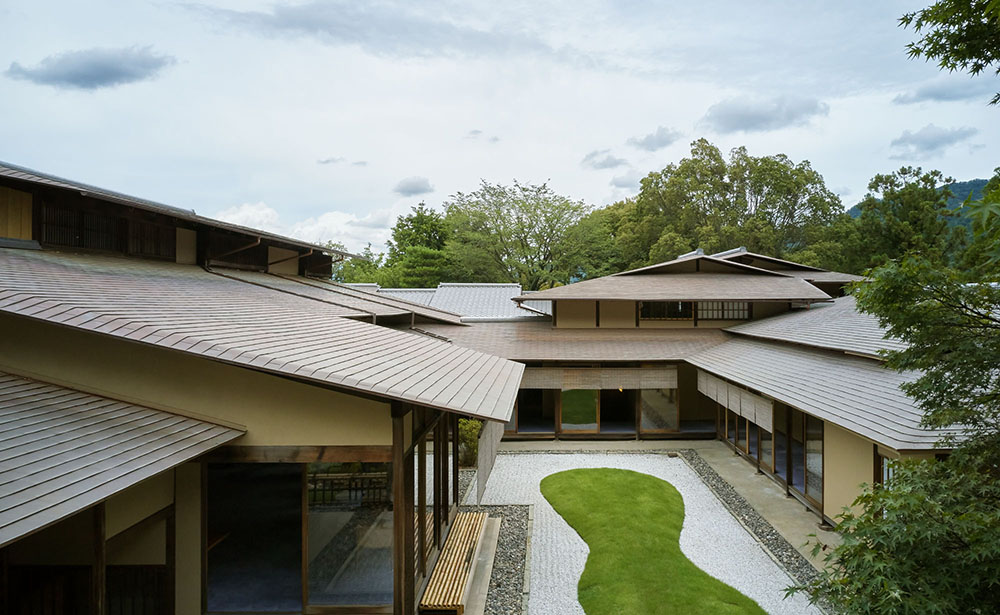 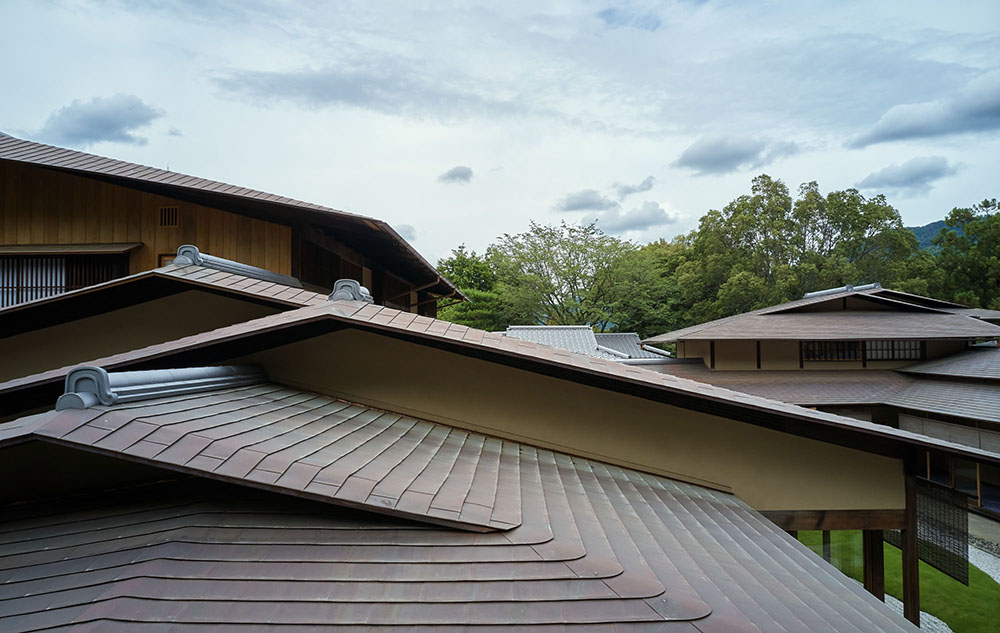 Before the construction of Kasui-en, Kijuan was located on the site, a villa of former Prime Minister Keigo Kiyoura, including a garden. The existing garden, in which a waterfall using the Lake Biwa Canal flows gently into the red pine forest that clings to the chert bedrock of Mt. Kacho, was made for Kiyoura by Hakuyo, the eldest son of a noted garden architect, Ogawa Jihei VII. The garden was a copy of an unexplored region where hermits live, drawn in a Shan Shui-style painting (a Chinese-style landscape painting) by literati. This art style was likely the preference among intellectuals and politicians in those days. Shan Shui-style painting is an experiential ink-wash painting style, in which writers and readers trace the journey to a hermitage deep in the mountains, a utopia far removed from the real world, and imagine their travels and lives. The pine trees hanging over the waterfall and cliff may be a shrunken view of Mt. Penglai, Mt. Huangshan, and Mt. Taishan, which the artists of the time loved. It is a garden that travels deep mountains, even though it is located in the capital. It is one of the steepest and most picturesque gardens in the Nanzenji area, which uses the water of the Lake Biwa Canal. I think the architect adopted this idea of the garden in the design of the building Kasui-en. Without this literary sensibility, a deep understanding of Kasui-en would not be possible. 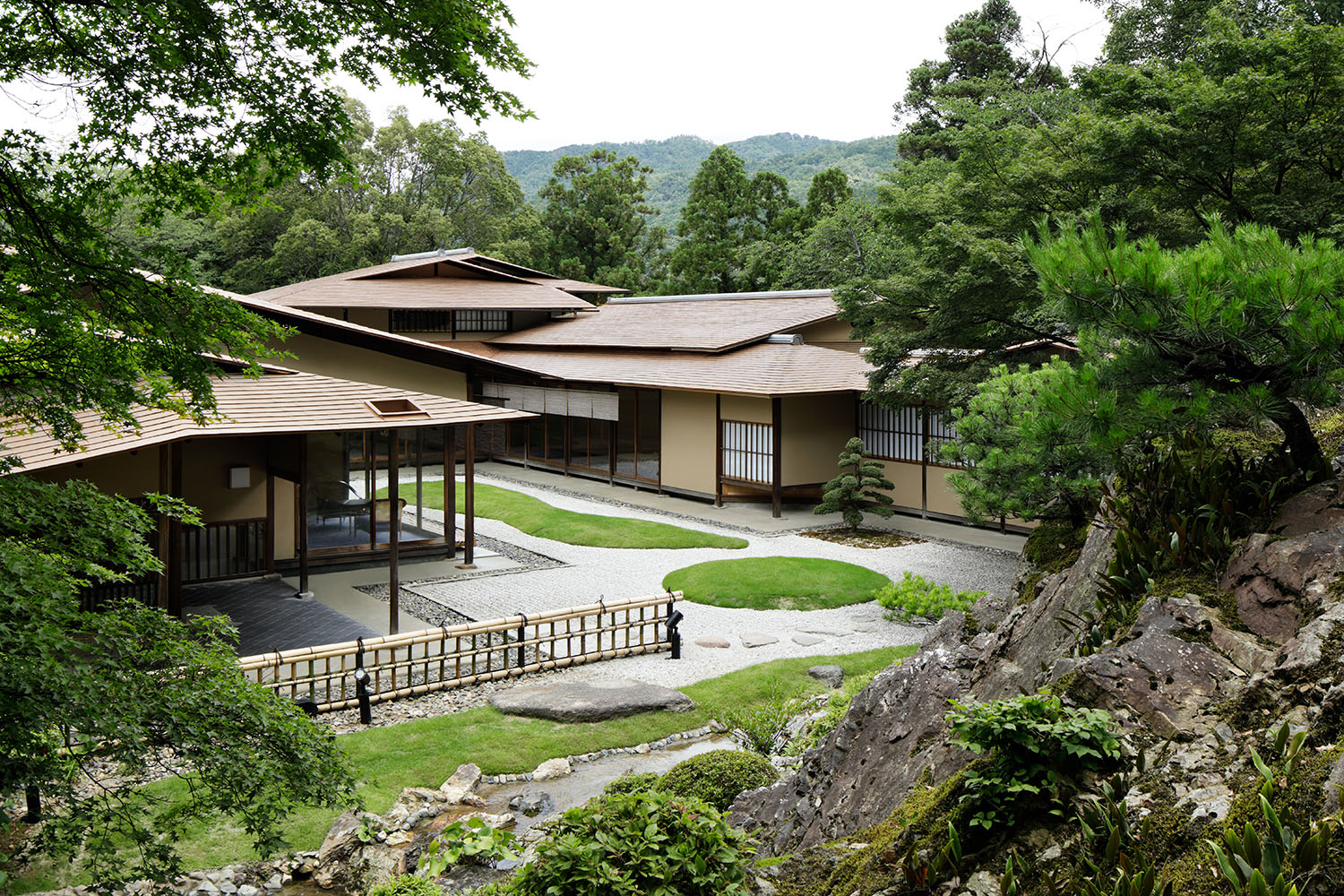 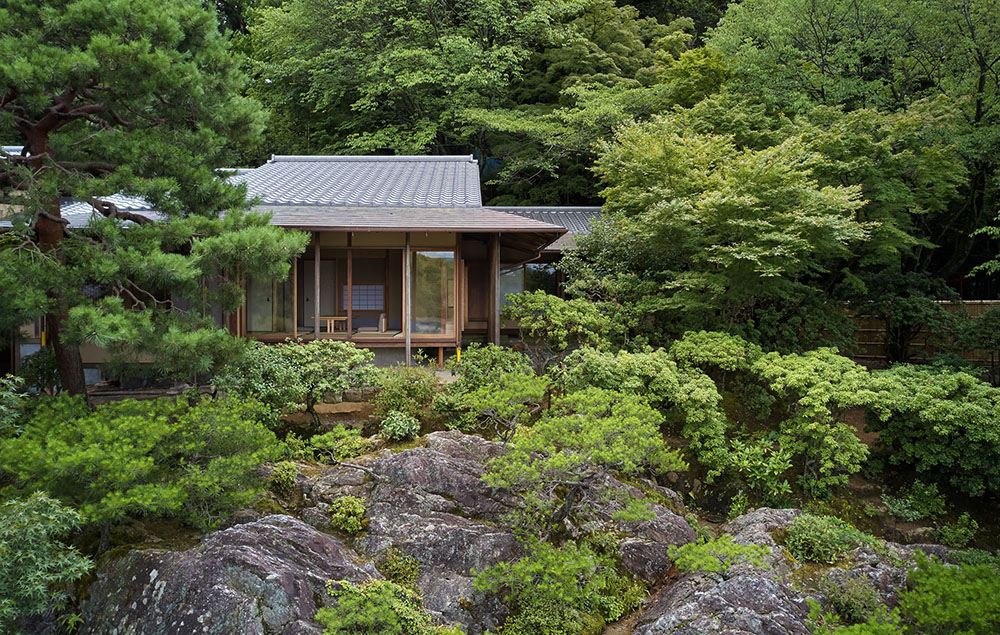 The absence of stones for footwear, which would usually be placed between the floor girder and the ground, emphasizes the feeling of floating even more, and the appearance of living in a temporary house without destroying nature conveys a view of literary figures representing nature, full of modesty and impermanence. If you look up from a stone for seated meditation in front of the entrance, you can see the eaves of the one-story guest room called "Tsuki (Moon) 7" that stands on top of the waterfall. This dynamic structure, reminiscent of Fallingwater, designed by Frank Lloyd Wright, was the result of the fact that Murano took over Hakuyo's philosophy of garden design and aimed to embody the hermit's hermitage in the deep mountains. In contrast, the white sand courtyard was designed by Murano, and in a flat dry landscape garden, green artificial hills with motifs of a gourd (often used as a bottle for rice wine) and a shallow rice wine cup are floating. This combination of motifs is said to be a copy of the garden of Sanbo-in, a sub-temple of the Daigo-ji Temple. There is a contrast between a rough cliff garden that makes use of the terrain and a dry landscape with an abstract yet concrete motif. At first glance, this contrast-rich garden appears to be out of proportion. However, considering the literati’s interest in Shan Shui-style painting, the intention of Murano's garden creation becomes evident. From Murano's unique, extremely low chair in the lobby, you can see a solitary island in a sea of white gravel from Shirakawa River, and Mt. Penglai, where the imaginary hermit lives. The upward corridor to the guest room of “Tsuki 7” resembles a mountain path to the hermitage located at the top of the mountain. Sitting by the window of "Tsuki 7" at the top, eating while looking out at the streets of Kyoto stained by dusk in the evening, and further looking down on the dry landscape garden that I had seen before, I really understood the meaning of the garden for the first time. The waterfall disappeared from my view, and Mt. Penglai was replaced by a bottle of gourd and a sake cup, while the sound of sake poured gently into it echoed. This is the worldview that literati admired. The immortal mountain hermits drank sake in conversation with the moon and pine trees in a hermitage in the deep mountains, which is a sensibility of life related to Shen Xian Thought and Taoism. The designer must have attached importance to this room because the only room that overlooks the dry landscape garden from the cliff is "Tsuki 7.” The other guest rooms were arranged along the garden path climbing the hermit’s mountain, but the interior of this guest room resembled a common Ryokan (a traditional Japanese inn) with a veranda in a six-mat room. It was small and very simple, and the interior did not give away its strong feature by the designer. 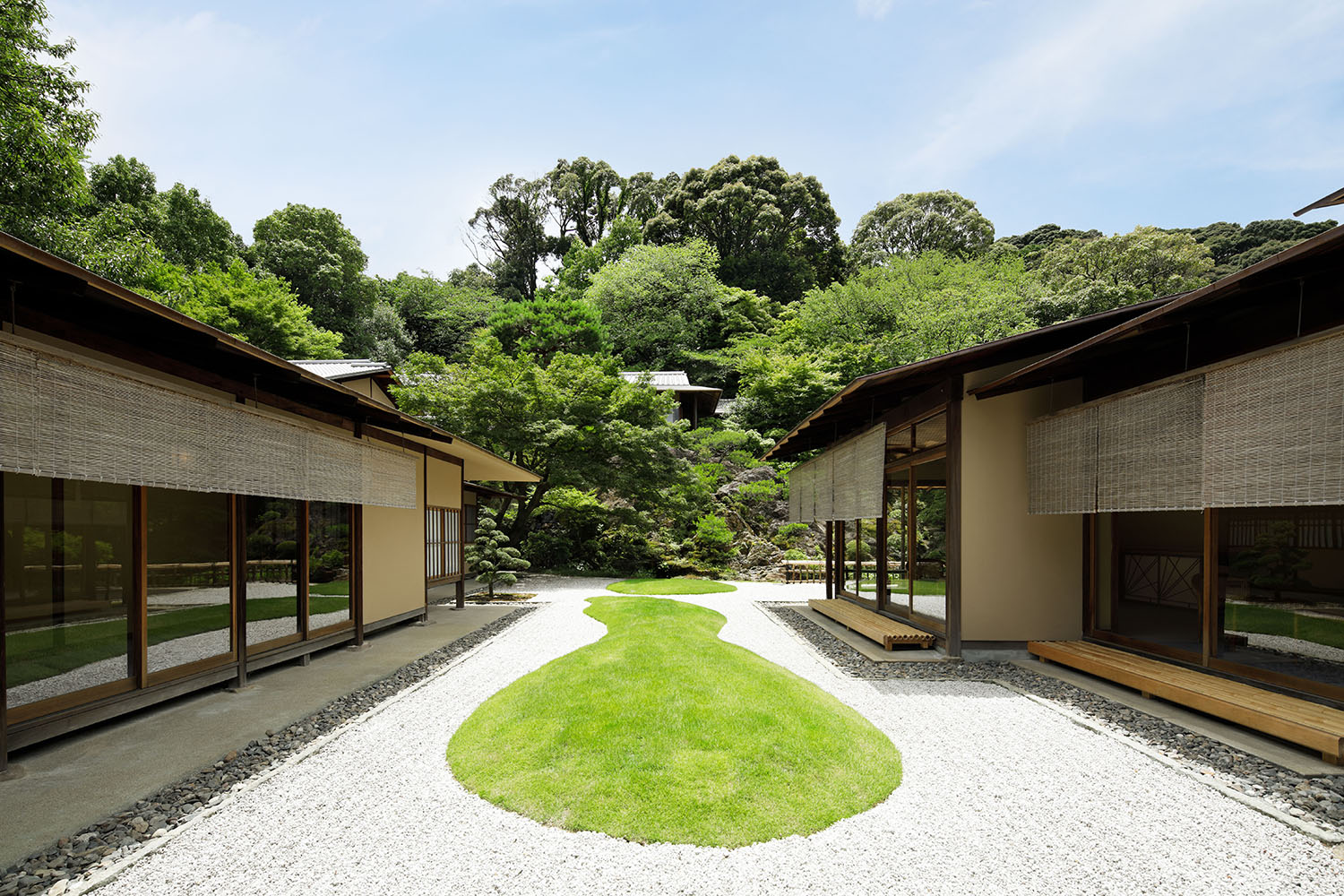 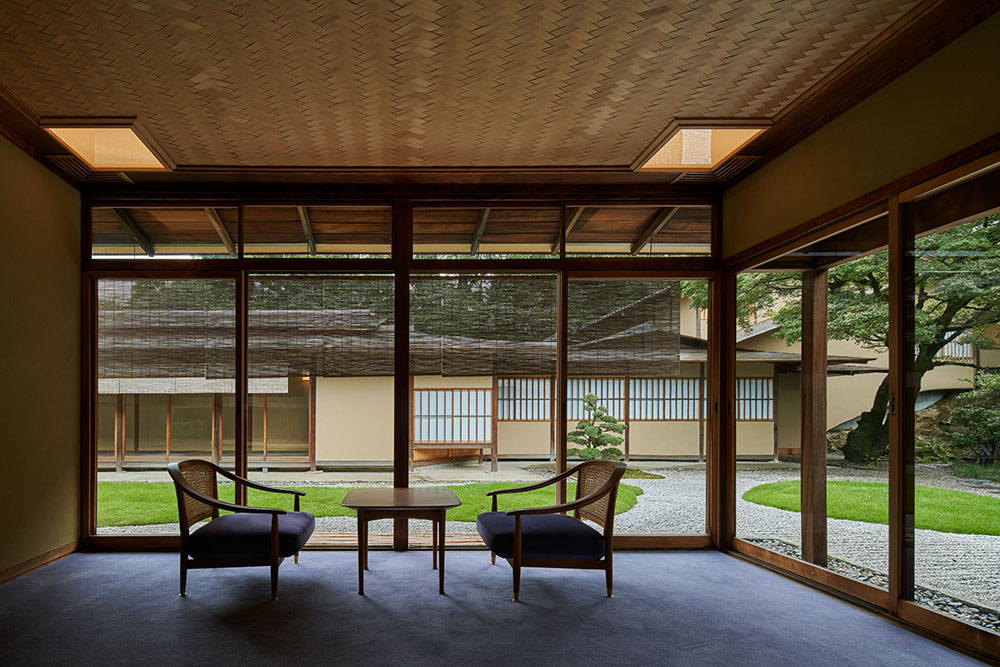 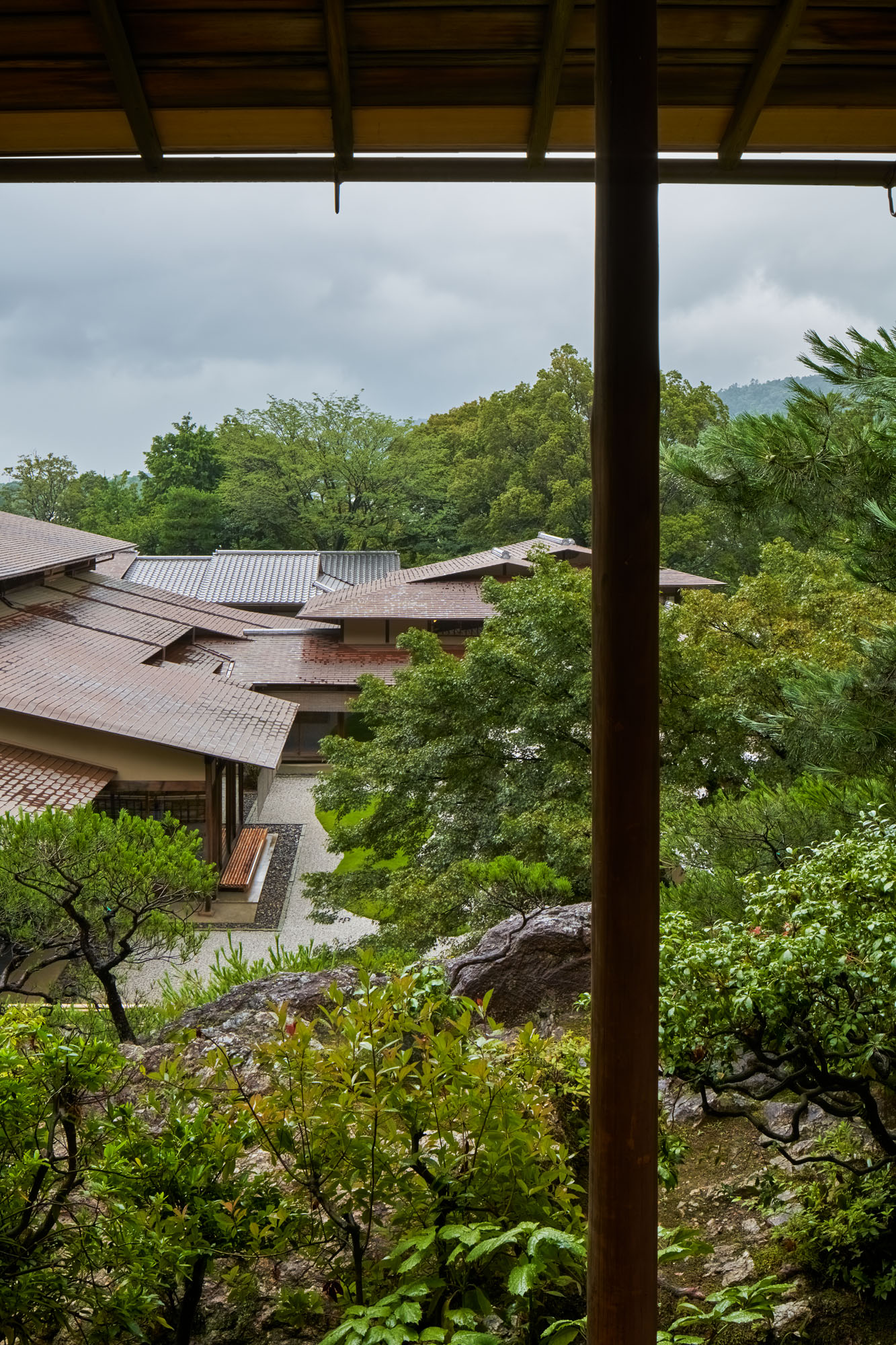 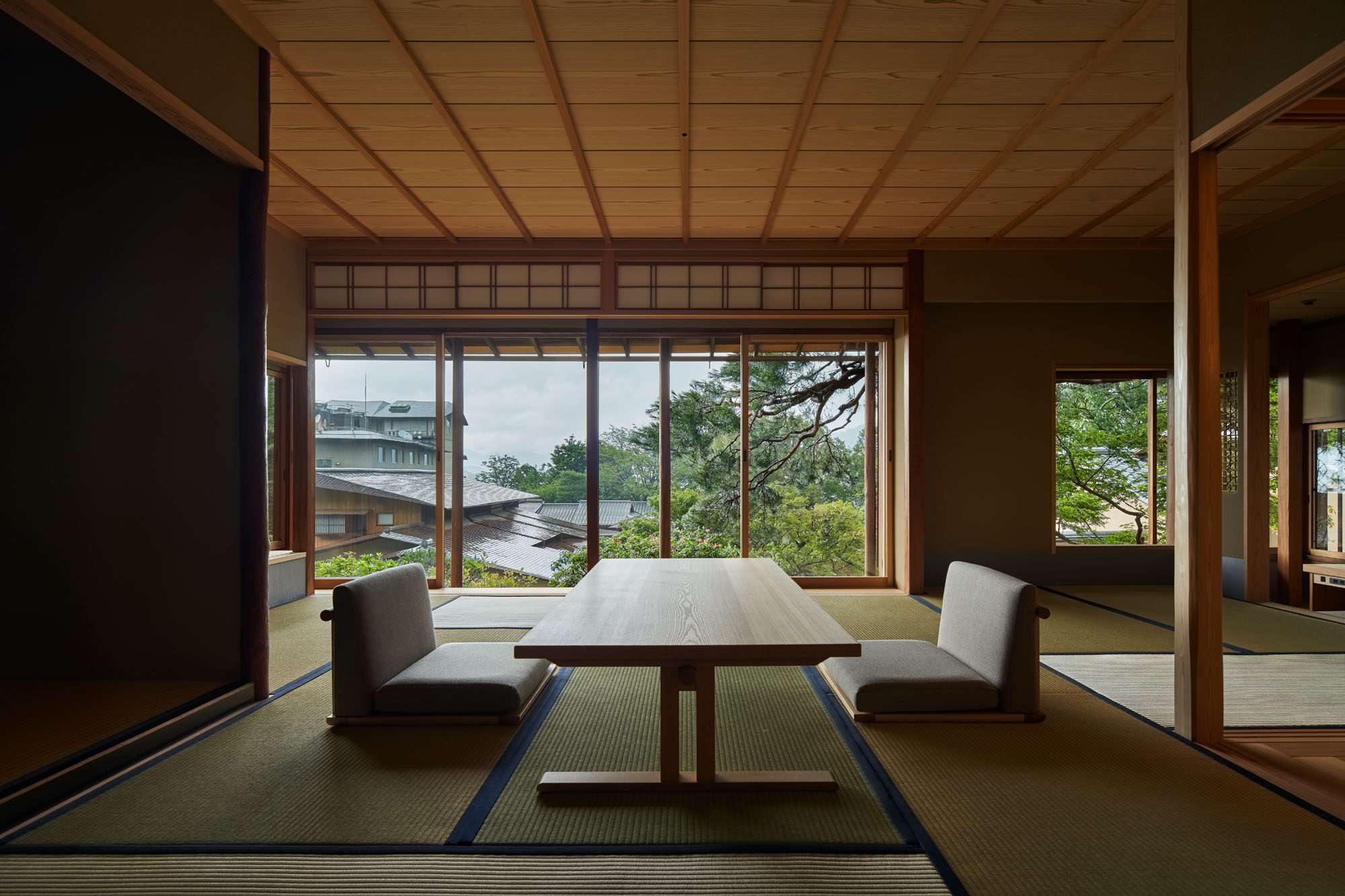 As for the garden, the exterior, and the common area, the major premise of the hotel was to maintain and restore its original design. However, as indicated in the renovation plan for the main building, it was required that the two rooms be integrated into one single room and the former second bedroom be upgraded with a substantial bath space. In this renovation, only a part of pillars, the Tokonoma (an alcove in a traditional Japanese room where art or flowers are displayed), the design of the transom and Shoji (a paper sliding door) would be left. Some pillars had to be cut off and joined to adjust the level difference on the floor, and all of the existing Juraku, a kind of clay native to Kyoto, walls had to be repainted. In addition, all of the ceilings were dismantled for the installation of braces for reinforcement and air conditioners in the ceilings with long narrow outlets. The renovation of buildings with the high cultural value is usually carried out by clearly separating the area of preservation from the one intended for restoration. However, as described above, it was extremely difficult to renovate the guest rooms in the conventional way. Therefore, the floor plan was maintained only for "Tsuki 7," while all other guest rooms were changed entirely. The large hall on the second floor, which was no longer used due to a decrease in demand for Japanese-style banquets, was renovated into a two-room living room with a floor made of Japanese roof tile-like tiles so as to create the atmosphere of a terrace with a good view, partly because the floors of the south wing were reduced in order to provide a panoramic vista. A room near the lobby, which was used as a warehouse, was changed into a library holding Murano's books and materials. 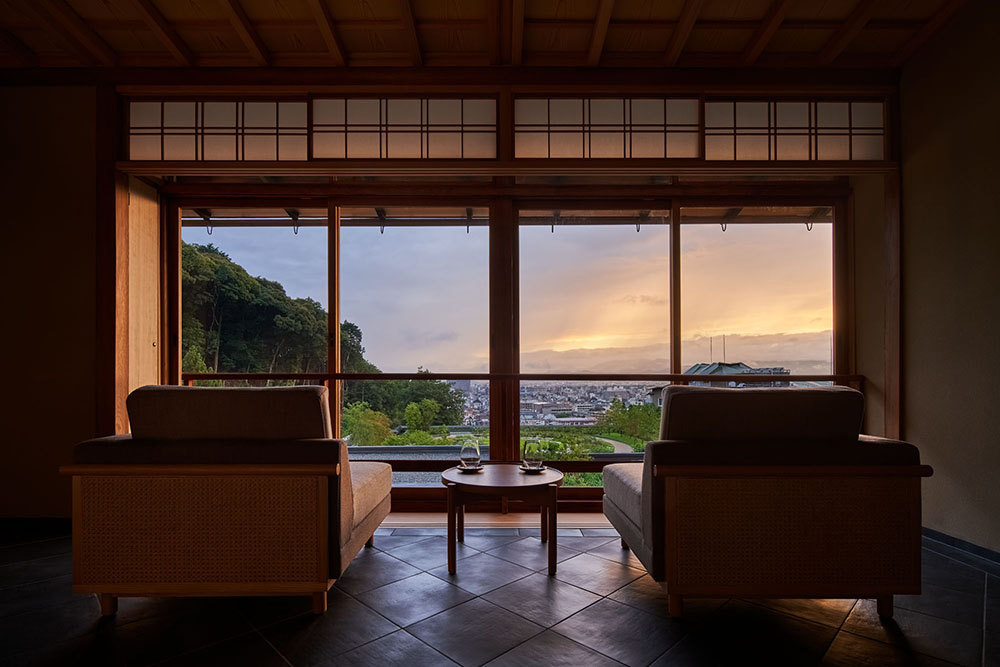 We renovated the building by constantly asking ourselves how to inherit the worldview of literati that Murano inherited from Hakuyo, as in "If Murano were alive, what materials and new technologies would be used for renovation?” The reason for this is that as the thin roof edge at Kasui-en was made of a hybrid steel and wood frame, the “Sukiya Style by Murano" developed here was thought to be a traditional Sukiya sublimated into a more delicate and flowing space by modern industrial technology. A set of Tokonoma and a closet is considered enough for each new room integrated with the two old rooms, but since the wing wall attached to Tokonoma could not be removed due to its structure, a small space that was formerly used for another Tokonoma and closet was left over. To accommodate Murano's view of the world as a literato, a small study was set up, and a fountain pen and ink are prepared there as amenities to create a space for drawing sketches and writing letters. The unstructured wall was designed to have a large lattice window made of delicate metalwork plated with brass, although usually made of bamboo and reed, to allow you to see through a backspace and provide the room with depth to guide the natural light deep into it. This is intended to inherit the original design of lattice windows made of reeds as large as possible and improve durability. 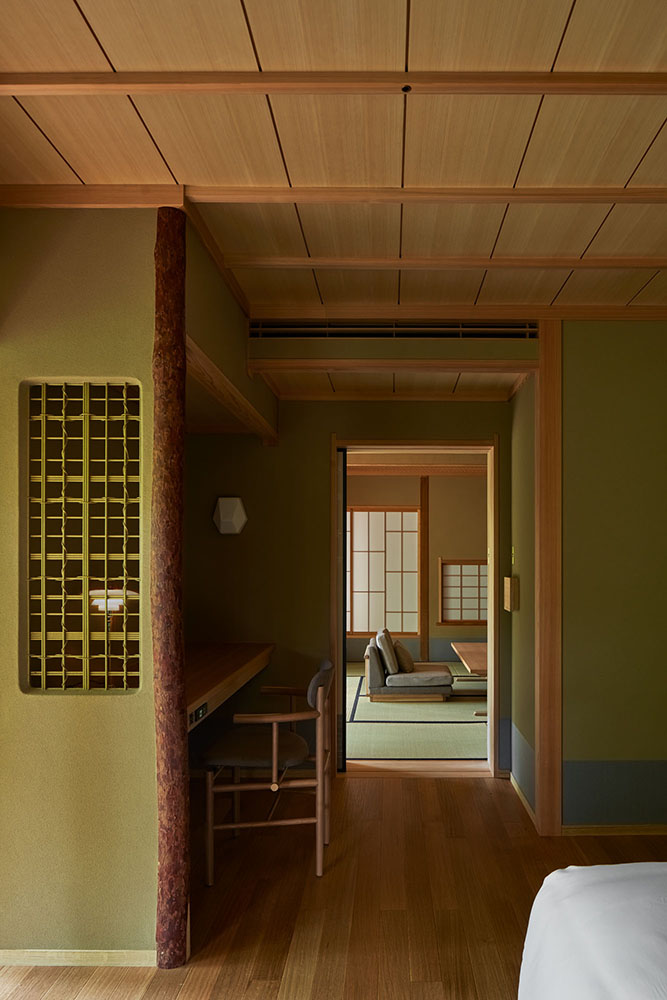 In addition, bluish Japanese paper inspired by the Lake Biwa Canal was put on the lower wall around the room to emphasize the horizon so that the center of gravity of the space was kept low, making the room look wider. The patterns on the sliding paper door correspond with the trees and garden scenery seen from each room and express scenes in which cherry blossoms and maple leaves, printed with mica, briskly fall into the water of the Canal on its lower part of the door. The swirling pattern of water is called Kanze-mizu, the traditional one, and is printed with Gofun, a white pigment. We tried to print this pattern several times and checked the amount of mica to use the minimum necessary amount of mica in the pattern, with the intention of having slight visibility that appears only when viewed from a certain angle. The lighting in the Japanese-style room is equipped with a tiny downlight with a diameter of only 2cm on the edge of the rod, and the glass ball light for reading on the bedside is covered with a cloisonne net made by a craftsman in Kyoto and supported by a special metal piece painted with brass. The wall bracket light transformed the original lighting into a smaller size through the use of three-dimensional Japanese paper technology and LED. All of the furniture is redesigned to harmonize with the Japanese space with lightness and a delicate depth, such as the study chair and lounge chair made of thin logs horizontally and vertically, and the table, sofa, and bed made by combining small parts in layers to reduce the feeling of pressure. 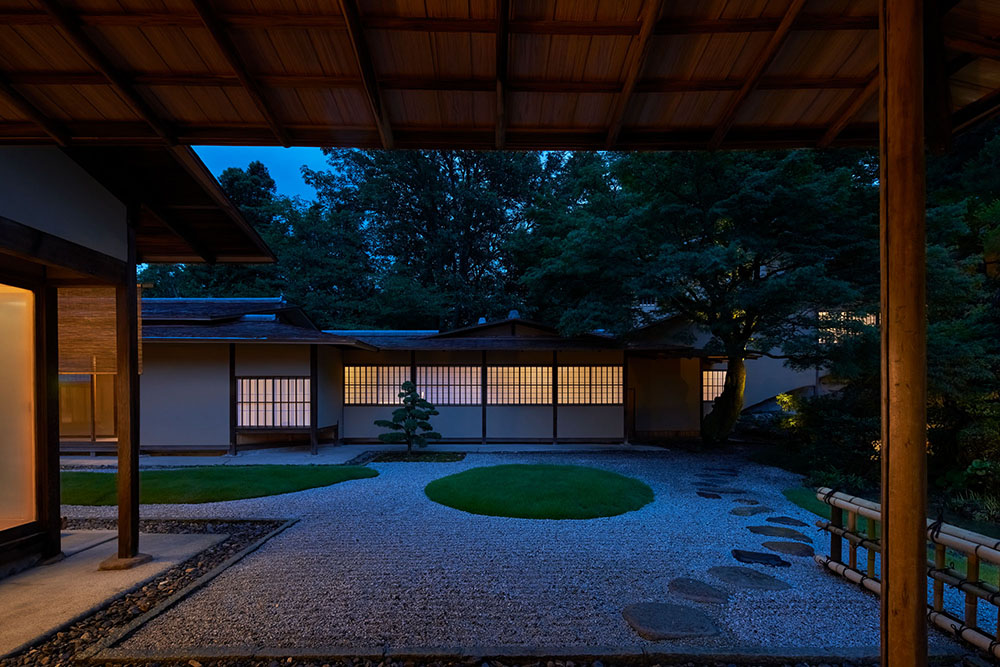