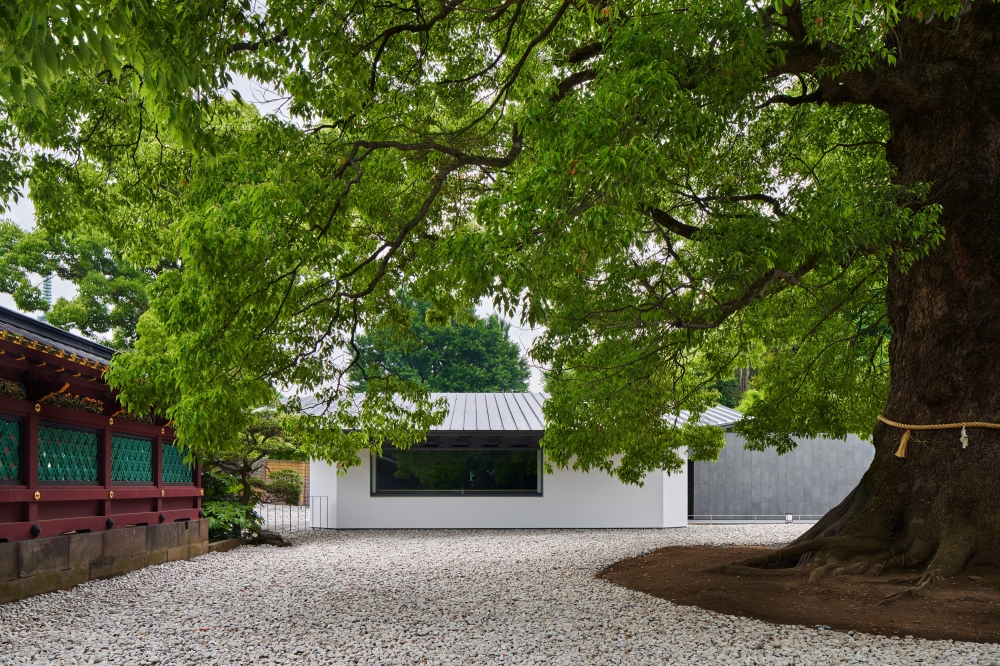 The project comprises an inner approach to Ueno Toshogu Shrine and a courtyard of prayer centered around a sacred tree over 600 years old. Established in 1627 on the plateau of Ueno, which is northeast (a.k.a. the demon’s gate) of the Edo Castle, Ueno Toshogu Shrine deifies Tokugawa Ieyasu also known as Tosho Daigongen (Great Deity of the East Shining Light) as the deity. The magnificent shrine is in one of the Shinto architectural styles known as Gongen-zukuri where the main and worship halls are linked. After having miraculously escaped damage from the Battle of Ueno at the end of the Edo period, Great Kanto Earthquake in 1923, and air strikes during World War II, it stands unchanged offering comfort to the visitors. For the planning, we reexamined the flow of traffic that had been a burden on the roots of the sacred tree, hence designed a sanctuary garden purified with Ise Gorota gravel and a winding approach around the garden. Of the two buildings along the way with shed roofs, one is the Shrine Amulet Place of Conferment in the style of a worship hall, whereas the other is the Meditation Pavilion where the visitors face the sacred tree to purify and bring peace to their minds before entering the shrine. 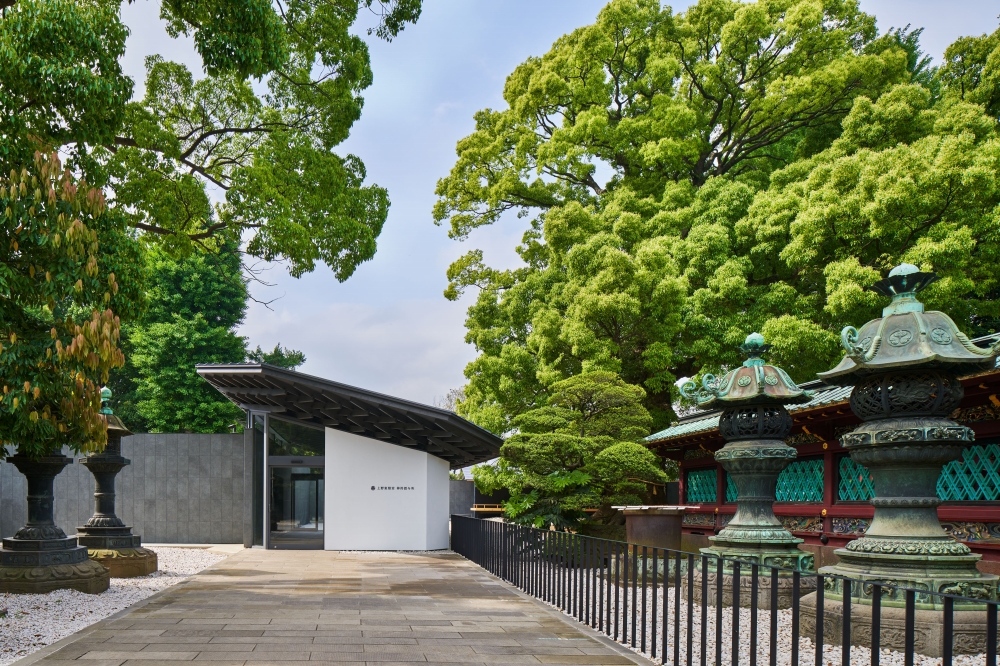 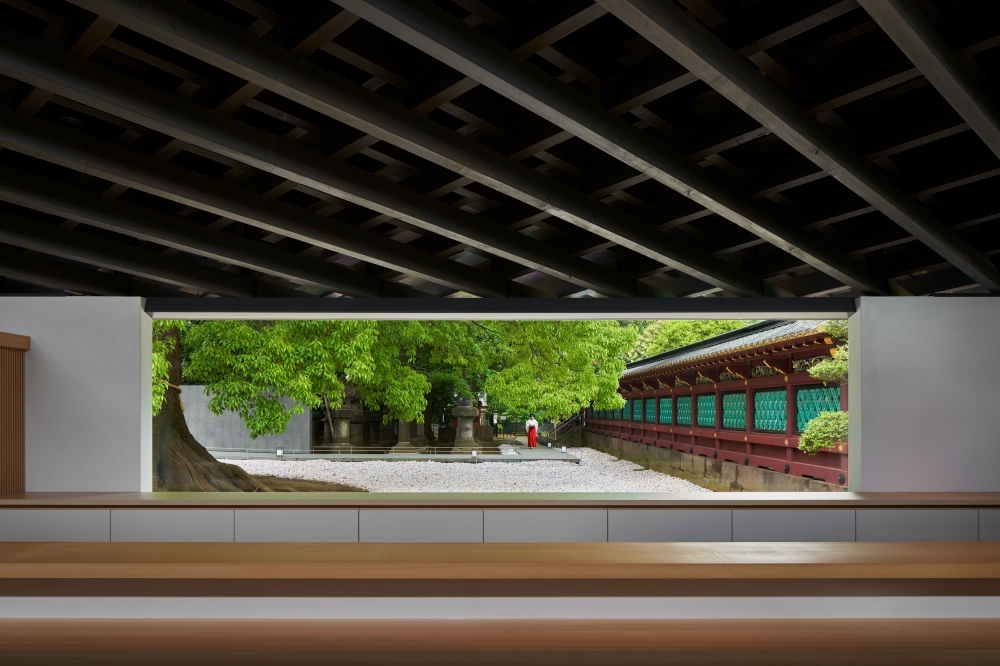 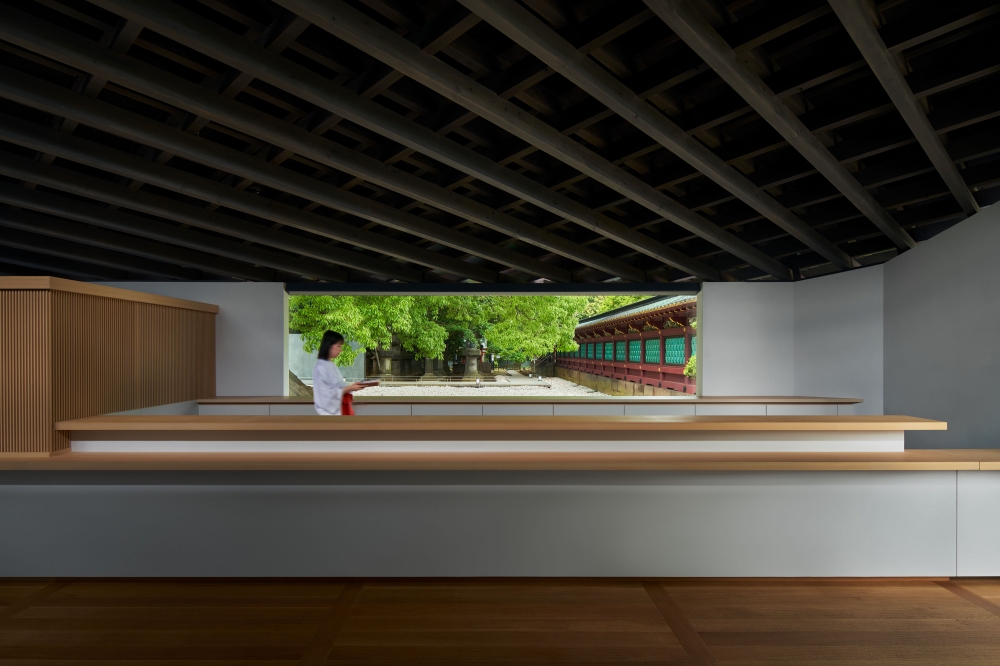 The view of the garden enshrining the sacred tree from the Shrine Amulet Place of Conferment. 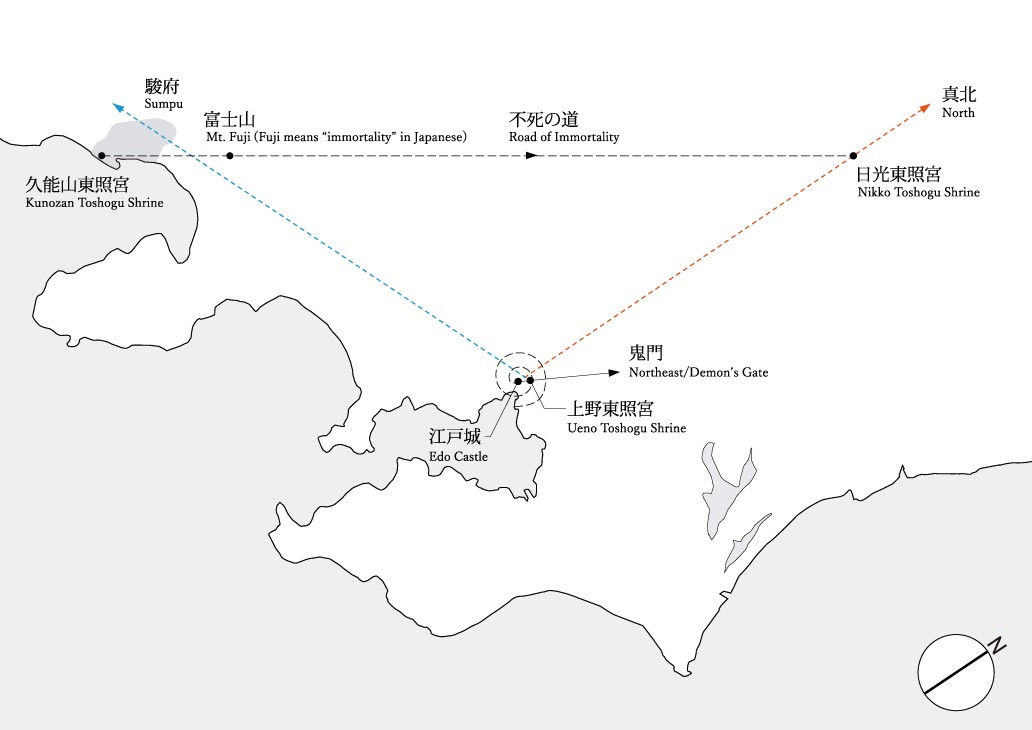 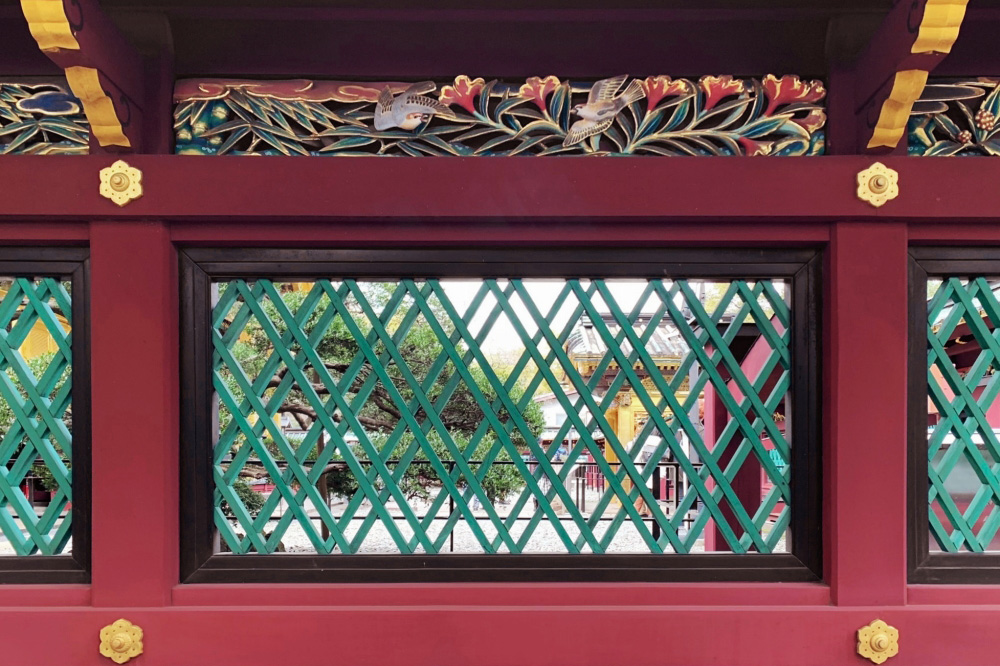 The design of the roof is inspired by the lattice screen wall that creates a sacred boundary, and has a double-diamond lattice structure with the intention of creating a sacred space underneath. One axis of the rafter points true north that connects the shrine with Nikko Toshogu Shrine, while the other axis points towards Sumpu where Kunozan Toshogu Shrine is located. Through the architecture, one can dynamically relive the journey of Tokugawa Ieyasu becoming a deity (Tosho Daigongen) after the first anniversary of his death, crossing the immortal Mount Fuji from Kunozan and was transferred to Nikko, directed by the Polaris that shines in true north above Edo. Thus, the building also serves as a remote place for worship for Sumpu where he rests in his grave after spending his youth and last years as the creator of the Tokyo metropolis, and for Nikko where he is enshrined as the deity. 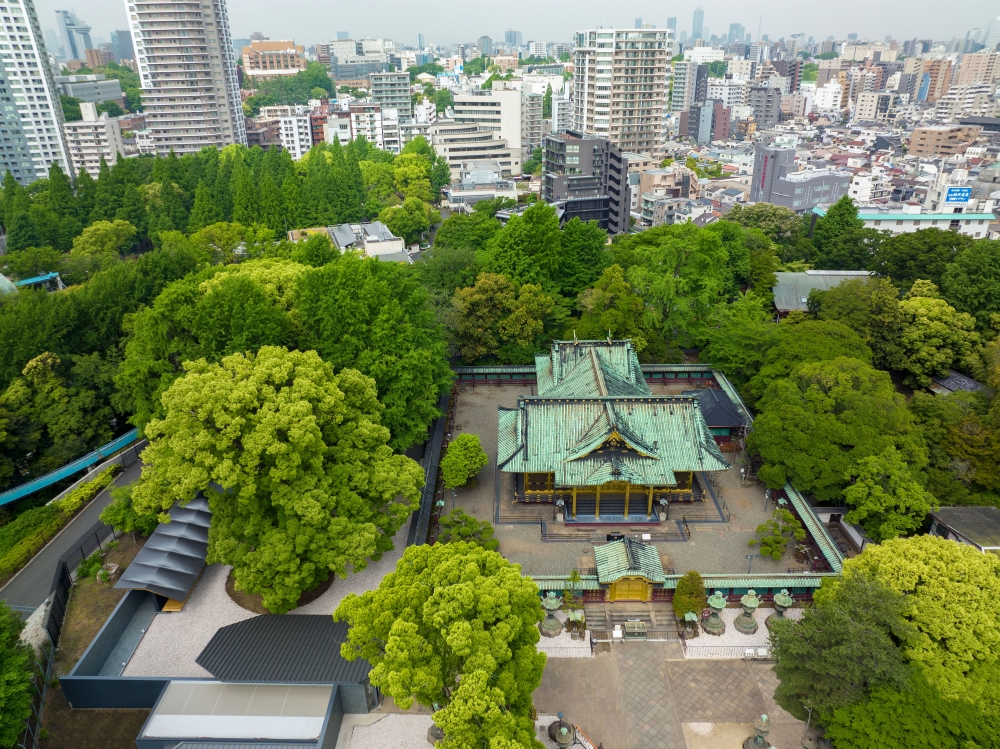 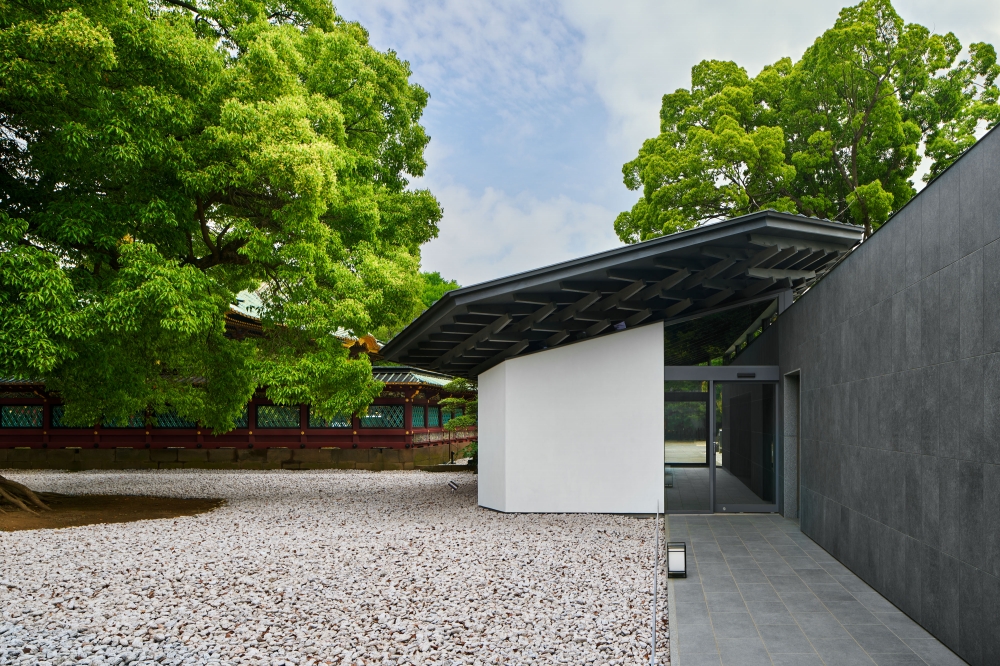 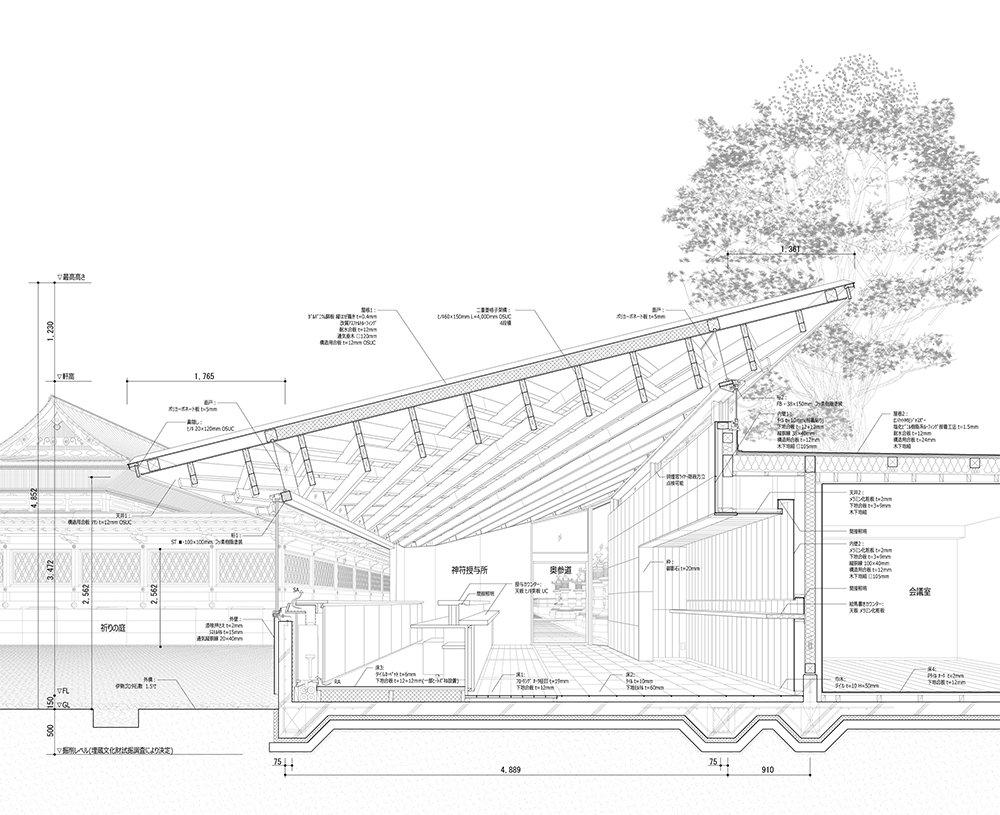 The battens were concealed around the polycarbonate blockings to emphasize the double-diamond lattice frame and the roof that looks as if floating. The roof structure material of the Meditation Pavilion is the large ginkgo tree that served as a fire prevention tree for the shrine over the years. It had to be removed due to its condition, hence we decided to revive its existence by designing a roof that looks as if its foliage spreads out. However, because the tree was becoming hollow from decay and we were unable to secure enough long lumbers, we needed to form the roof using lumbers cut and dried to 60 mm square at the smallest. Thus, by extending out the 12 m-wide and 3 m-long eave with its rigidity enhanced by shell structure, and pulling the opposite side like a balancing toy, we were able to create a space with no pillars on the side of the sacred tree. 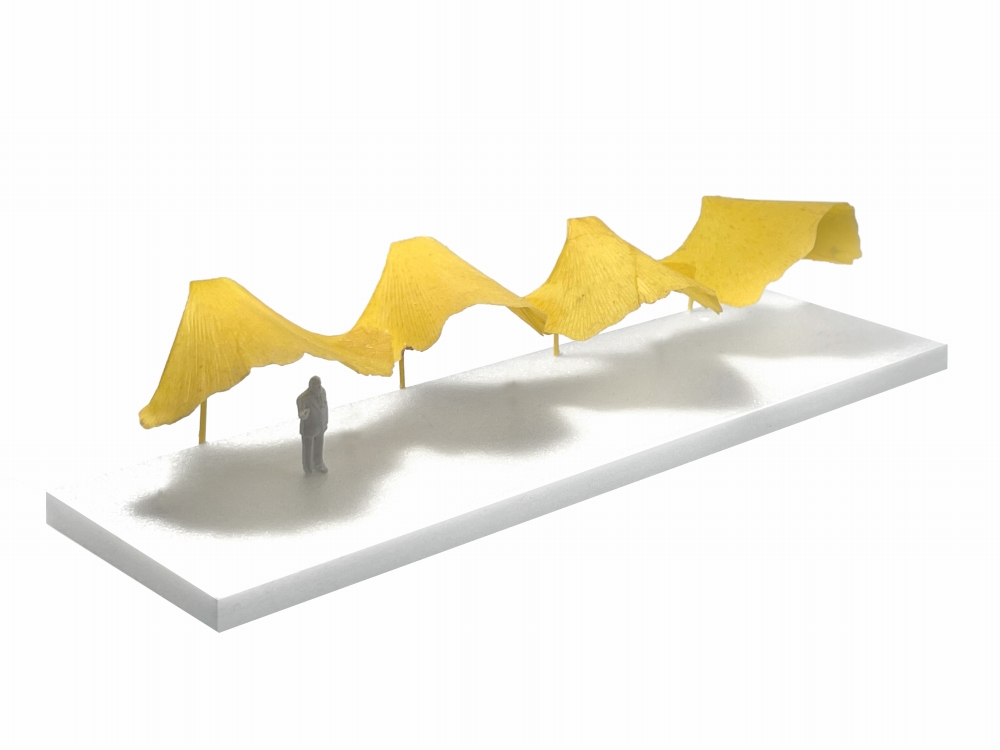 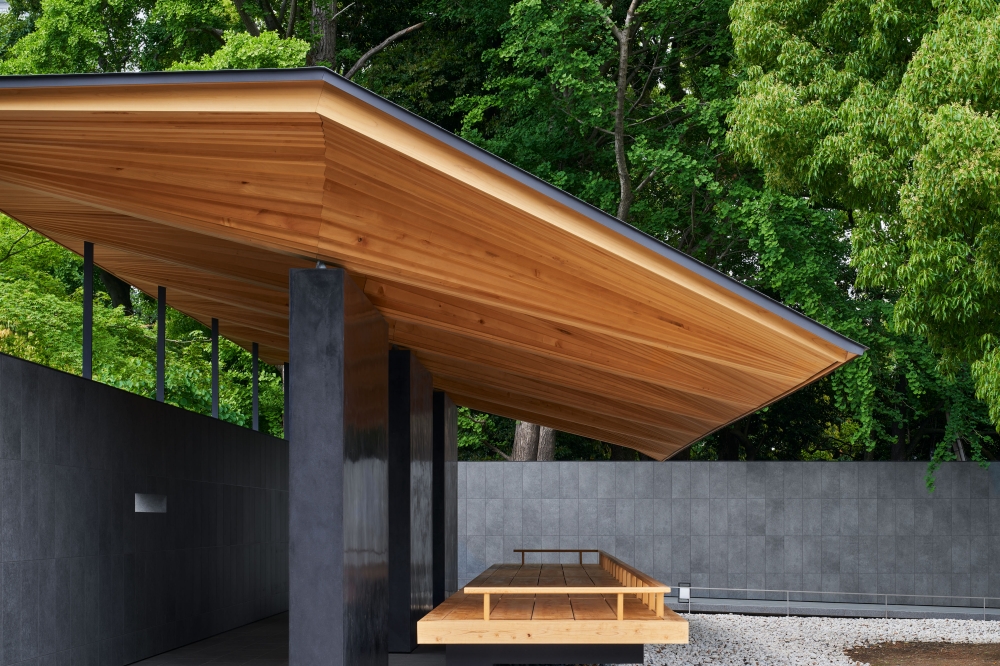 The vault roof envelops the space above the head of each person, guiding the conscious to the self. The eaves lower its head as if in reverence for the shrine, guiding one to half-close the eyes for prayer. The gingko vault roof creates a space enveloped by the sounds such as rustling leaves from the sacred tree and the singing of birds. The eaves form a straight line at the edge to create a frame for the unchanging scenery from the Edo period. When turned around, the stump of the large gingko tree that has started to sprout is visible from the slit in the wall.