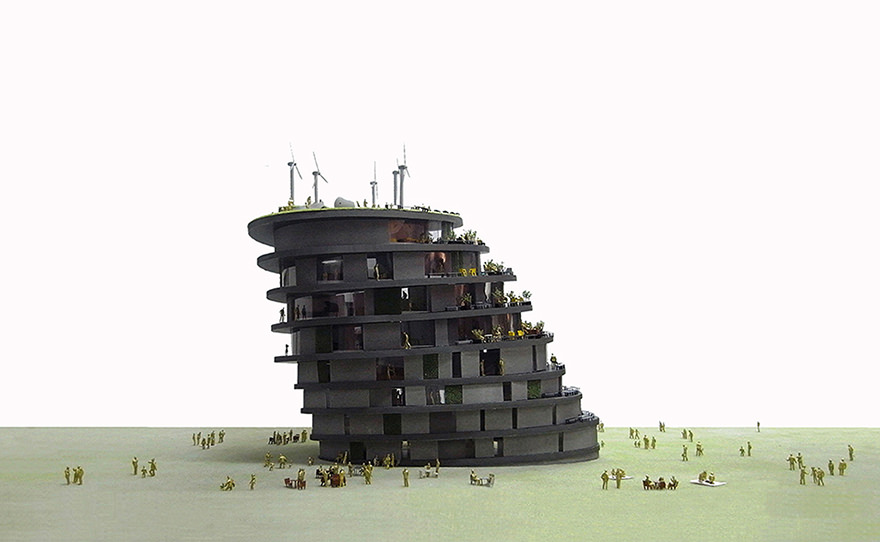 The 3.11 Tohoku earthquake disaster is expected to be followed by more large earthquakes. Pacific coastal cities urgently need to implement measures to reduce tsunami risk. Meanwhile, Japan no longer has the economic resources to invest heavily in preparation for tsunamis that will come who knows when. Constructing massive seawalls, moreover, is neither rational in terms of construction and maintenance costs nor in keeping with the spirit of the Japanese as a people who have always lived closely with the ocean. This evacuation tower serves in normal times as a community hub with disaster prevention and medical service functions. By providing a safe environment where children and the elderly can evacuate in an emergency, the tower enables the existing community to maintain its way of life without having to uproot residents for relocation on higher ground. The site is on flat land in a coastal city where many people could not safely evacuate during the 3.11 disaster, because there were no high buildings in the area. The tower stands at a broad intersection and is easily accessed by people on foot. The elderly can evacuate by walking up the ramp winding around the tower’s circumference. On flat land, tsunamis progress uniformly in a single direction. The building therefore takes the form of an elliptic cylinder with its narrow end receiving the oncoming tsunami. This design was inspired by the composition of a shark’s skin, which smoothly channels water away from its surface. Up to a height of 15m, the ramp is shielded by strong, windowless walls of reinforced concrete to protect the evacuees and building from earthquakes, tsunamis, and floating wreckage. We have “twisted” the upper portion of cylinder so as to maximize its southern face for better livability and energy reduction. The tower not only offers safety to residents; in normal times, it serves as a community hub and can be used for evacuation drills. It also stands as a reminder of the danger of tsunamis and the know-how needed for a safe response.